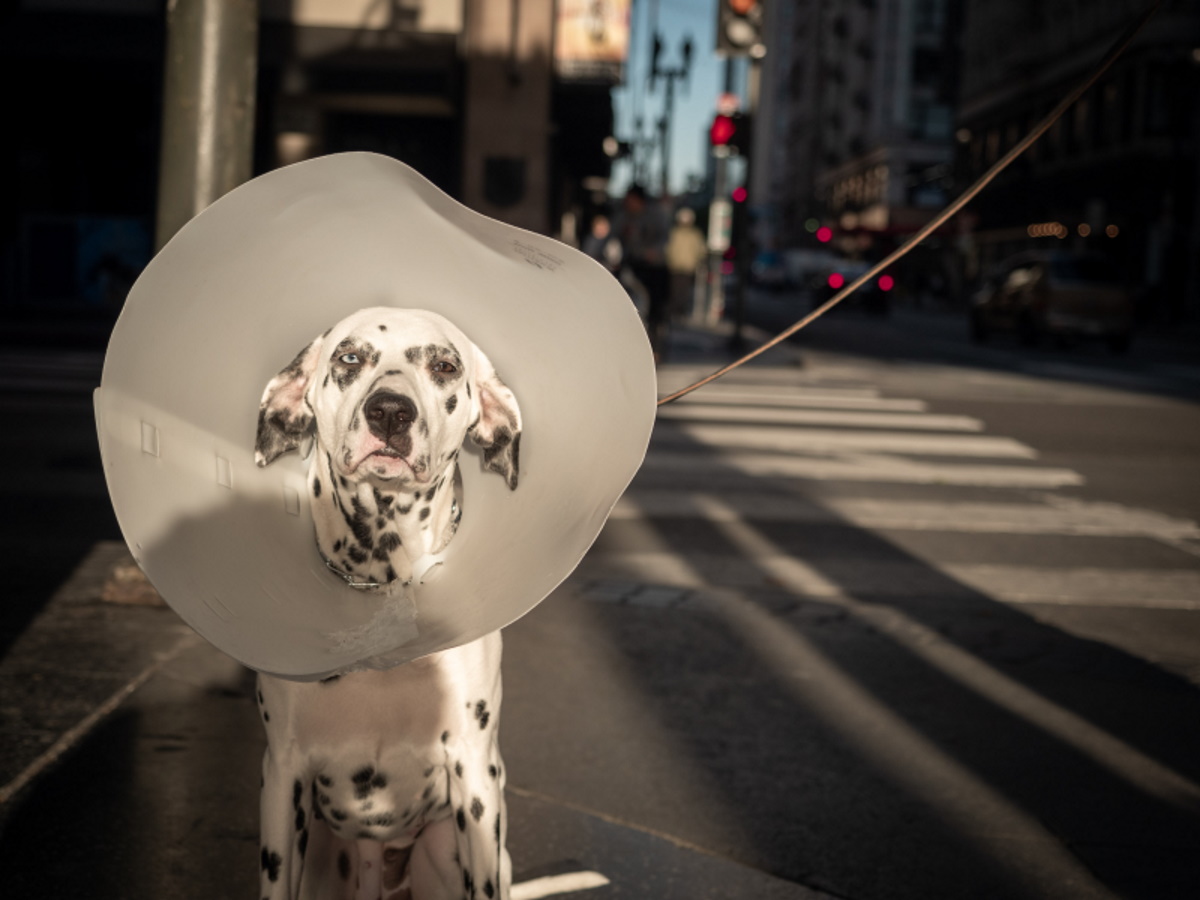 If you have a dog, chances are high that you have dealt or will have to deal with the dreaded cone at least once in your life. That is to say, dogs have to wear a cone for a number of reasons, ranging from having an infection to just being operated on, for example. Now, the guidelines when it comes to your dog wearing a cone aren’t always crystal clear. For example, can dogs sleep with a cone on? And if the answer is “yes”, should they? Keep reading to find out!

Table of Contents: hide
1) Why Is A Cone Necessary In Some Cases?
1.1) A Recent Operation
1.2) Allergies
1.3) To Avoid Infection
2) Can Dogs Sleep With A Cone On?
3) Other Ways To Help Your Dog Get More Comfortable With Wearing A Cone
3.1) Pick A Transparent Cone
3.2) Regularly Give Treats To Your Dog
3.3) Essential Oils
3.4) Be Patient

Why Is A Cone Necessary In Some Cases?

Before answering the above-posed question, it’s needed to explain the exact purpose of your dog wearing a cone. Namely, only then, you’ll be able to fully understand why dogs can or can’t wear a cone while sleeping.

In essence, some dogs have to wear a cone in a way to protect themselves. The vet orders this when they consider it necessary in order to keep your dog from reaching certain places on its body. 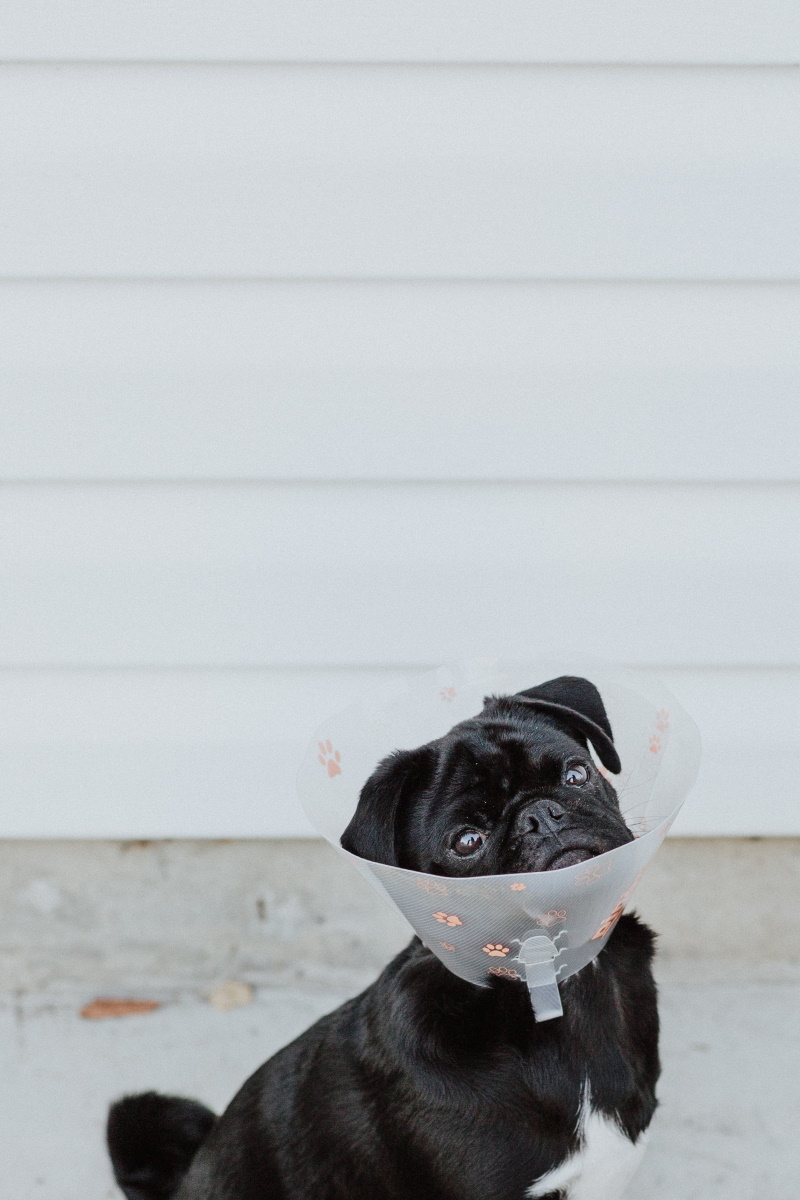 For starters, the main reason why dogs have to wear a cone is that they have just been operated on. If your dog has just gone through an operation, chances are that there’s a fresh scar that’s healing or that possible other wounds are present.

Well, that’s precisely where the purpose of a cone lies. Specifically, when your dog is wearing such a cone, your dog won’t be able to reach the scar, it doesn’t matter on which body part. To make this less abstract, the cone will get in the way and limit your dog’s freedom of movement that way.

Of course, an operation is not always necessary for your dog to have to wear a cone on the veterinarian’s orders.

Another main use of a cone is against allergies. Concretely, if your dog suffers from allergies, it’s highly likely that you’ll find that your dog is extremely itchy. Additionally, your dog might want to bite at those places that itch.

So, that’s where a cone comes in handy. A cone separates a dog’s head from its body, so your dog won’t be able to bite and lick at certain places on its body anymore. Consequently, a cone can help prevent a number of complications that could otherwise definitely be present. 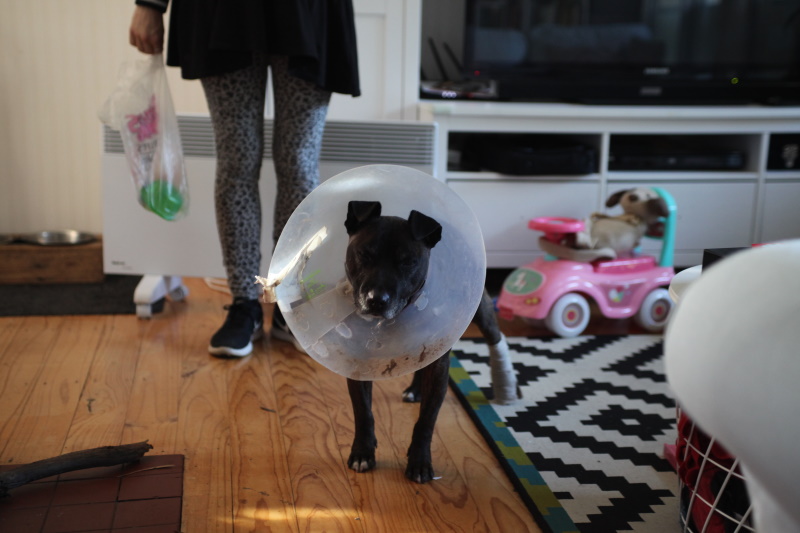 Finally, a cone is also the perfect way to avoid infections from arising. To be more concrete, your dog has certain bacteria in its mouth and when your dog bites and licks at wounds and such, this opens the door for all kinds of bacterial infections. again, a cone can be beneficial in this case, because it’ll make sure that the problem doesn’t get worse, at the very least!

All in all, the common thread with all these purposes is that cones are put in place to ensure that the healing process runs smoothly. Without a cone, your dog would just be able to lick at certain wounds, effectively decreasing its chances of a full recovery.

Can Dogs Sleep With A Cone On?

Well, the short answer is a resounding “yes”, for sure, your 4 legged friend can sleep with a cone on. There is absolutely nothing wrong with letting your dog wear a cone to sleep, despite what some people might say. Even more so, in some circumstances, it’s even recommended to let your dog sleep without taking the cone off.

Concretely, some dogs struggle a lot with wearing a cone and this could be because of several different reasons. For example, it could be the case that your dog gets a stressed, panicky feeling from wearing a cone. However, it could just as easily be so that your dog just doesn’t like the feeling of wearing the cone. 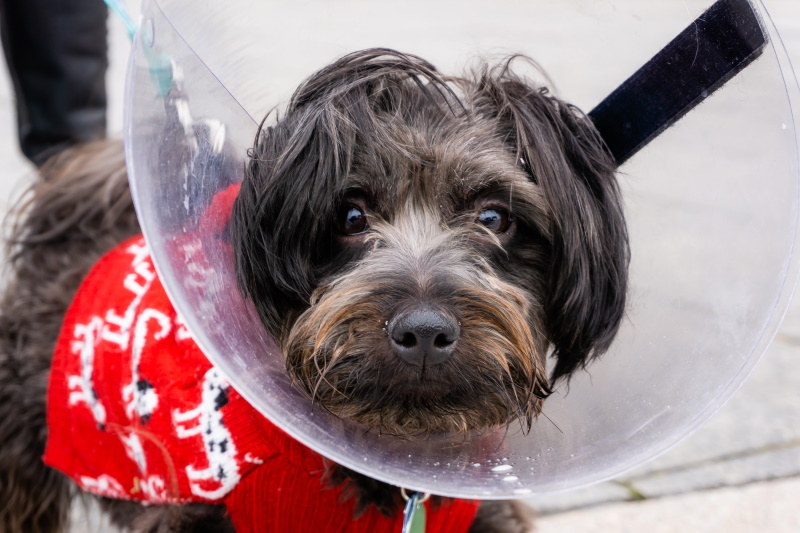 If this sounds familiar to you, it could be beneficial to try letting your dog wear the cone while sleeping. When you do this, your dog can get used to the feeling of wearing a cone more easily. This would truly be the best possible outcome, taking the purpose of your dog wearing a cone into account!

If you’re wondering whether or not this would be comfortable for your dog, you really shouldn’t worry too much. Namely, the days of hard, inflexible cones are long behind us. With these hard cones, even eating and drinking could be tough on your dog, let alone sleeping!

Nowadays, there are models of cones available on the market that are way more flexible and more pleasant in general for your dog to wear. With these new models, your dog isn’t too limited in its actions, and thus, sleeping with a cone on shouldn’t pose that big of a problem in the slightest! 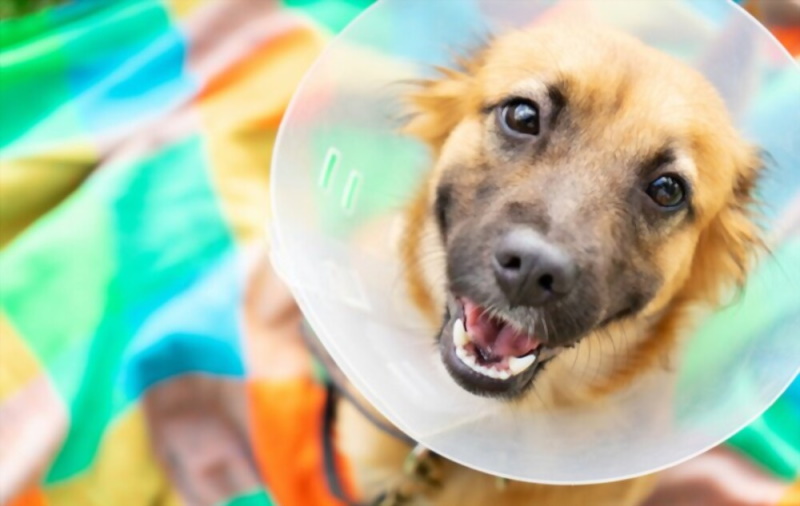 Besides letting your dog wear a cone to sleep, there are other proven ways to make sure that your dog gets used to the feeling of wearing a cone. If you keep these tips in the back of your mind, you’ll get your dog acquainted with the cone properly in no time at all!

First and foremost, it could be wise to pick a transparent cone if you have the choice. Namely, dogs often have a problem with wearing a cone because it limits their field of vision and that scares them. So, by letting them wear a transparent cone, you take away some of that fear and this could really do wonders for your dog!

Regularly Give Treats To Your Dog

Furthermore, it’s also always a good idea to give your dog treats from time to time while wearing a cone. This way, you’ll make sure that your dog doesn’t only associate wearing a cone with negative emotions, but you’ll also provide positive incentives.

It might seem a bit controversial, but another tactic you could use is to rub essential oils on the collar of the cone in question. These oils have the ability to add a soothing element to the whole experience, effectively making your dog more comfortable with the cone at the same time! 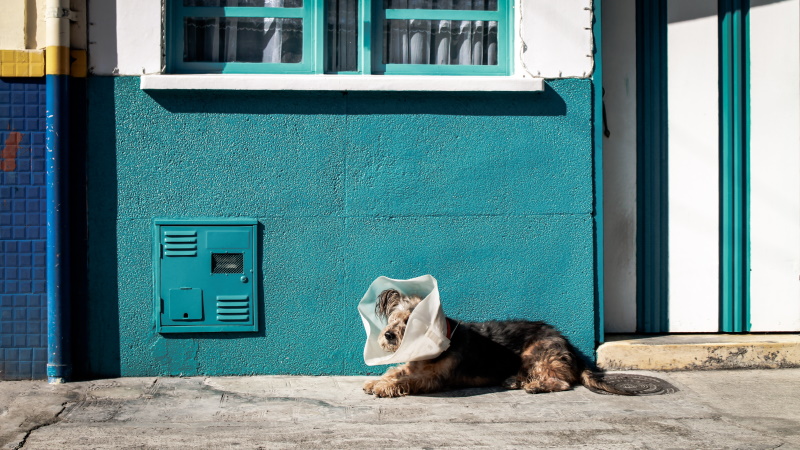 Last, but certainly not least, it’s of utmost importance that you remain patient at all times. You can’t magically expect your dog to be completely at ease with wearing a cone from the beginning. Instead, you should brace yourself for the fact that it might take some time to get used to and that’s okay.

To conclude, can dogs sleep with a cone on? Dogs definitely can wear a cone while sleeping without a problem. Even more so, this can really offer you a lot of advantages if you’re trying to let your dog get used to the feeling of wearing a cone. however, if you still notice that your dog acts rather oddly while wearing a cone, it could be a good idea to consult a vet to know which further steps to take, if necessary.